The Music House Museum Presents The Barry Ross Trio On May 18 at 7:30PM 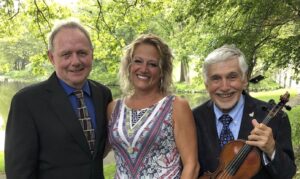 The Music House is proud to present the Barry Ross Trio on May 18 at 7:30PM. Join crossover Violinist, Barry Ross, acclaimed Jazz Pianist Terry Lower, and renowned Vocalist Lana Hoffman, in “The Great American Songbook and All That Jazz”.  Offering a thrilling evening of the most beloved music ever written, with songs by Cole Porter, Irving Berlin, Duke Ellington, Harold Arlen, and George Gershwin, including his immortal “Rhapsody in Blue”.  Their renditions will delight your senses and evoke unblemished memories

Lana Hoffman, Vocals: Lana Hoffman is widely regarded as one of the Midwest’s most versatile and engaging singers. Having performed the title role in Broadway’s “A Closer Walk with Patsy Cline”, she is also recognized as an accomplished jazz singer, in collaboration with many fine jazz artists. She is a featured soloist with local big band orchestras including The Gull Lake Jazz Orchestra and The Otsego Jazz Ensemble.

Terry Lower, Piano: Terry Lower began piano lessons at the age of six, and after studying at the prestigious Berklee College of Music in Boston, Terry returned to his native state of Michigan, and has been on the jazz scene for over 40 years. Considered by many to be a virtuoso jazz pianist, his performances here and abroad include 2 jazz tours in Italy, several stints on cruise ships, and performances with Bernadette Peters, the Mills Brothers, the Nelson Riddle Orchestra, and many jazz icons including Benny Golson and Frank Morgan.

After a decade of performing together, this remarkable Kalamazoo trio is taking their show on the road for their only Traverse City appearance this year. You will not want to miss it