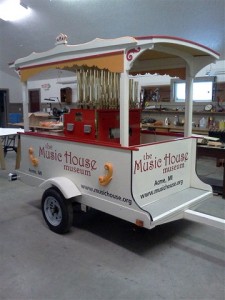 In 1855, Joshua Stoddard of Worcester, MA invented a steam powered instrument that he called a “calliope”.

At first played by keyboard and later automated, these instruments were used on steam boats and by circuses. Many larger steam calliopes could be heard up to twelve (12) miles away. Because of their large volume, they often would be the last unit in parades.

The use of pressurized steam caused calliopes to be often loud and unmusical, and potentially dangerous to operate if the steam pressure rose too high.

As an answer to these problems, in 1905, Joseph Ori successfully built a low pressure wind calliope in Worchester, Massachusetts. By 1912, he would be commercially producing air calliope instruments which were safer and more musical than their steam powered predecessors.

Norman Baker of Muscaline, Iowa established the Tangley Company to build similar instruments in 1914. He patented the name “Calliaphone” for his particular design of instruments. The Tangley Calliaphones were built successfully until 1931, when Mr. Baker was forced to leave the business for legal reasons unrelated to building the instruments.

The most popular of the Tangley Calliaphone models were the 43-note CA-43. This instrument had a keyboard, but also could be played with a Type A music roll automatically. As the Type A roll had more notes than pipes in the 43-note Calliaphone, some notes were coupled back to fit the instrument’s resources. Although standard Type A piano rolls could be played, special arrangements designed for the sound of the Calliaphone were written to show it off to its best advantage.

Ever an entrepreneur, Mr. Baker built his instruments into vehicles, including ones that were custom designed to look like the product that was being advertised. The Tangley Company additionally built the ST-43 and ST-58 models of the Calliaphone, which were advertised as being voiced for “indoor use”. The number refers to the number of pipes.

In 1984, Dan Miner of Donellson, Iowa purchased the rights to use the Tangley name and began to build Tangley Calliaphone again under the name of the Miner Manufacturing Company, Inc. He also built popcorn wagons and trucks, the Otto Accordion (an automated player accordion), and cut player rolls for the automated instruments. With his untimely death in 2008, Dan Dohman, a 22 year employee, purchased the business and changed its name to the Miner Company. The company continues to be located in Donellson, Iowa.

The Music House Museum’s Calliaphone is a 43-note National model designed for outdoor use. Using real brass pipes and pressurized wind, it can be heard for up to a quarter mile outdoors.

The calliope is mounted on a trailer so that it can be transported and used at events throughout the region. A generator enables it to be played in the absence of electricity.

The Museum does consider renting the instrument out for private parties.. Please contact the Music House Museum via–email at info@musichouse.org to make an inquiry.