Somewhere in the southern United States, around the time of the American Civil War, a skilled cabinet maker decided to build a cabinet organ either for his own home or perhaps as a gift.

In the late 1980s or early 1990s, the Music House Museum was gifted with this cabinet organ. The documentation of the instrument’s history and its donor has been lost through time, if they were ever known.

In the spring of 2013 while cleaning out the Museum’s workshop storage room, the organ was rediscovered in boxes. Surprisingly most of the instrument’s casework and mechanism were found. A few moldings and the mechanism by which to pump air into it were missing.

As documentation on its origin and builder had been lost, the organ was reassembled carefully observing its peculiarities in order to try to date it and surmise its origins.
Successfully reassembled and restored in the fall of 2013 by Jim Gruber, a local retired organ technician, the organ is again playing and on display in the Museum’s Mini City Gallery for all to view and hear.

Guests are invited to play it.

It is furnished with two ranks of wood organ pipes: a soft 8’ stopped gedeckt and a more spritely 4’ open flute, as shown here. The pipes are labeled with their pitches using European nomenclature.

Speaking on a very low wind pressure (1 ½ inches of pressure), the organ has a gentle sweet sound definitely placing it in a parlor. It is pitched below A 435.

The cabinet is stained a red mahogany with gold painted stencils. The tonal openings (3) are covered with black cloth similar to what was found originally on it.

It appears that the middle opening has originally some sort of painted panel based on brackets that remain still in place. The keyboard’s white keys are of cow bone, verifying its American origin as shown below: 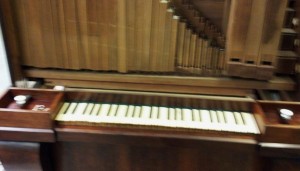 The following can be surmised about the organ

It was built in the American southern states based on the cabinet and other wood used in its construction (tulip poplar and gumwood).

The builder was skilled in wood working and probably European based on the nomenclature used on the organ pipes for their pitches and the design of the cabinet.

The organ was built for own use as differing types of lumber and leather are used in its interior, as versus by commission.

The craftsman was not an organ builder by professions. There are many anomalies in the mechanical design of the instrument and placement of its pipe work that show experimentation and corrections. This includes the feeder bellows shown below: 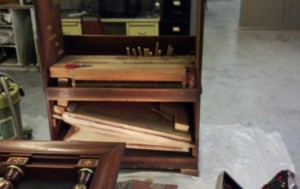 It dates from the era of the American Civil War based on the use of pages from “Olney’s School Geography and Atlas” to seal the bottom of the wind chest.

This publication by Jesse Olney (1798-1872) was first published in 1829 as “Olney’s Geography”, and was followed by later editions. In 1844, an edition called by the same title as on the pages taken and used in the instrument was published.

Plans are to do some careful revoicing of the pipework to improve their speech this coming summer (2014) and to place a latticework panel in the center tonal opening.