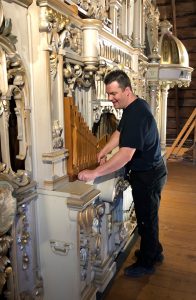 Jeffrey Verbeeck of the J Verbeeck Co. of Antwerp, Belgium, began work on the repair of the Music House Museum’s 1922 Mortier Dance Hall Organ on Oct. 31st and will continue over the next several days. This massive organ, weighing around two tons, was damaged last winter when the museum lost our furnace. While still playable, a crack sustained by the temperature and humidity fluctuations, caused the Mortier to lose several of its instruments. Verbeeck is very familiar with the instrument having worked with his father, Johnny Verbeeck, to restore its inner workings in 2013. The J Verbeeck Company is one of the few companies in the world that can repair these instruments and, when possible, uses materials similar to those used in the original build to maintain historic integrity.

The J Verbeeck Company was established in 1884 by Jan Verbeeck. The company built and repaired the amazing automated organs for decades. When the demand for the automated organs faded with the advancements of the phonograph (especially the jukebox) and the radio, the company continued to build instruments but turned their focus to the repair of those that survived the ravages of war. Only a handful of the organs built by the Mortier Co. survived and even fewer companies remained that could service them. Fortunately this art continued with the J Verbeek Co. with the skills being passed from generation to generation. 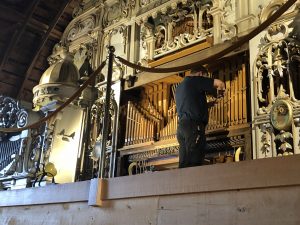 Jeffrey is now the fifth generation of Verbeeck craftsmen to possess these rare skills – skills that have been passed from father to son since 1884. When working on the Music House’s Mortier in 2013, Jeffrey described his childhood in the workshop beginning when he was still in a playpen. He joined the family business in 2006. Sadly, his father, Johnny Verbeeck, passed away in 2015 of cancer but Jeffrey continues the family legacy in his honor.

Thanks to the generosity of the Music House’s donor base, the museum was able to raise $80,000 to install a totally new heating, air conditioning and humidification system to protect  our entire facility and priceless collection. Unfortunately the damage had already occurred to the Mortier leading us to reach out to Verbeeck for assistance. The Mortier is the ‘crown jewel’ of our collection and is one of only a handful of such instruments remaining.