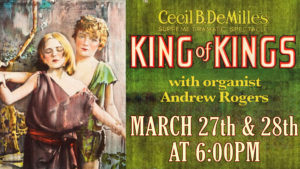 The Music House Museum is proud to present Cecil B. DeMille’s “King of Kings” accompanied by Andrew Rogers on March 27 and 28 at 6:00PM.

The King of Kings is a 1927 American silent epic film produced and directed by Cecill B. DeMille.   It depicts the last weeks of Jesus before his crucifiction and stars H. B Warner Warner in the lead role.

The film will be accompanied by Andrew Rogers on our ‘Mighty’Wurlitzer theater organ. Rogers, a Detroit native, is an organist at the Michigan Theatre in Ann Arbor. He also scores and performs silent films, and performs concerts throughout the U.S. and Internationally.